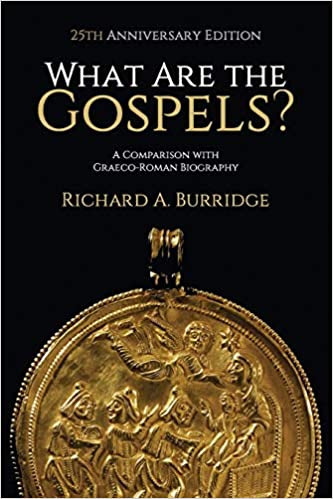 The publication of Richard Burridge’s  What Are the Gospels? in 1992 inaugurated a transformation in Gospel studies by overturning the previous consensus about Gospel uniqueness. Burridge argued convincingly for an understanding of the Gospels as biographies, a ubiquitous genre in the Graeco-Roman world.

To establish this claim, Burridge compared each of the four canonical Gospels to the many extant Graeco-Roman biographies. Drawing on insights from literary theory, he demonstrated that the previously widespread view of the Gospels as unique compositions was false. Burridge went on to discuss what a properly ‘biographical’ perspective might mean for Gospel interpretation, which was amply demonstrated in the revised second edition reflecting on how his view had become the new consensus.

The third, 25th anniversary edition not only celebrated the continuing influence of  What Are the Gospels?, but also featured a major new contribution in which Burridge analysed recent debates and scholarship about the Gospels. He both answered his critics and reflected on the new directions now being taken by those who accept the biographical approach. The new edition also featured as an appendix a significant article in which he tackled the related problem of the genre of Acts.

A proven book with lasting staying power,  What Are the Gospels? is not only still as relevant and instructive as it was when first published, but will also doubtlessly inspire new research and scholarship in the years ahead.

‘Burridge’s book is the most comprehensive and lucid discussion of the genre of the Gospels yet undertaken… This is a book that students of the Gospels cannot afford to avoid… It is a truly astonishing tour de force – interdisciplinary biblical scholarship at its very best.’ Biblical Interpretation

‘This volume ought to end any legitimate denials of the canonical Gospels’ biographical character. It has made its case.’ Journal of Biblical Literature

Richard A Burridge, ’From Titles to Stories’, in The Person of Christ, 2005
John Ashton, The Gospel of John and Christian Origins, 2014